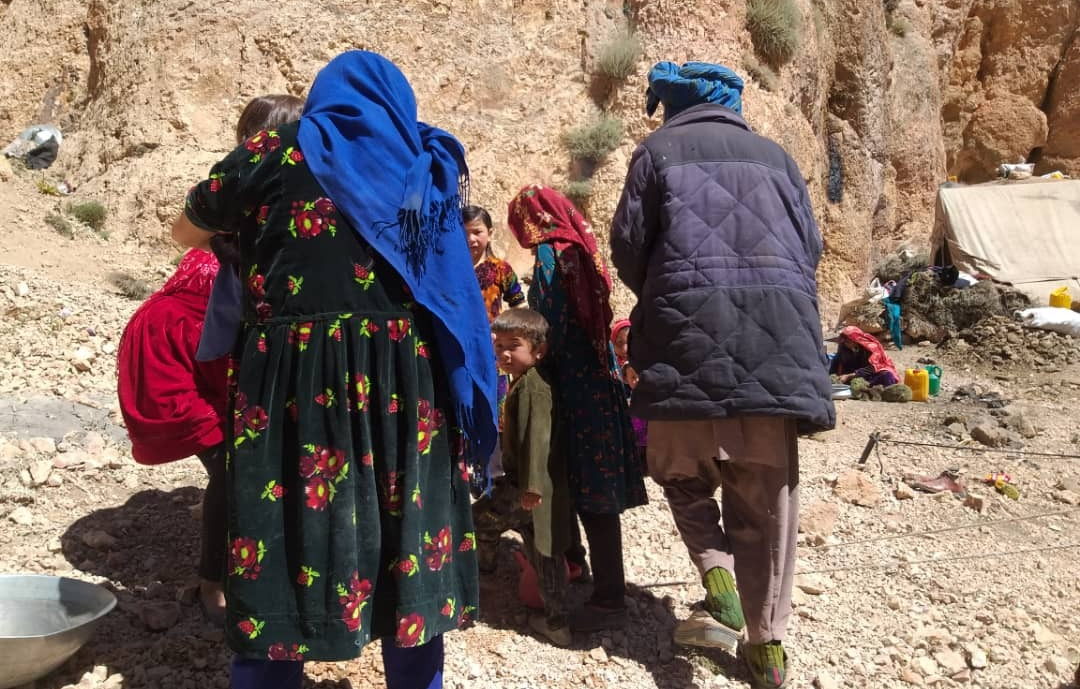 Almost 10 days have passed since the start of the war between the Taliban and Mawlawi Mehdi’s fighters in Balkhab district, Sar-e-Pul province. At the same time as this conflict rages, thousands of families from at least 35 villages in the district center have taken refuge in the mountains and valleys to avoid the revenge and possible atrocity crimes by Taliban fighters.

According to sources, most of these displaced are children, women, elderly and pregnant mothers.

Mohammad (pseudonym), a resident of Balkhab, who currently lives outside this district, says that his family and his 73-year-old father, who is seriously ill, have fled to the mountains due to fear of Taliban retaliation and torture. According to him, he has not heard from his sick father and family for four days now.

According to Mohammad, based on the information he has from some of his relatives in Balkhab, a number of displaced families have married off their young daughters to some young men without their consent, fearing that they will be disgraced by the Taliban fighters. Mohammad adds that until now, no relief organization has provided assistance to the displaced people of Balkhab war, while thousands of families spend their days and nights in the mountains and valleys without food and shelter. He calls on the relief organizations to reach out to the refugees, away from any discrimination and negligence, and to prevent another human tragedy out of the war refugees.

At the same time, in a video tape recorded by displaced people in “Dozdan Cheshma” area of ​​Yakawlang district of Bamyan shows that a number of displaced families in this area are in a very difficult and dire situation due to the lack of food and shelter. In the video clip, homeless refugees request and plead for immediate humanitarian assistance from aid organizations to save the lives of children, women and the elderly.

In this video tape, a group of displaced women can be seen who say that due to the difficulty of the roads, their feet and their children have smallpox and they are no longer able to walk.

Four members of an aid workers group, who asked that their names not be mentioned in the report, had gone to the border areas of Yekawlang, Bamyan and Dara-e-Souf, Samangan to check the situation and census of Balkhab displaced people. The members of this group have shared their observations with Hasht-e Subh: “On June 28th, after 11 hours of walking in the mountains, they finally reached the areas of “Hazar Cheshma”, “Sokhta”, “Band Pitab”, “Gandaji”, Sarsalakh” and “Safid Cheshmeh” of Yakawlang district of Bamyan,” said the group. “In these areas, more than a thousand displaced families spend day and night in the heart of cold rocks without food and water. Most of these displaced people are children, women and old people,” according to aid group.

According to these aid workers, one night before they visited these areas, an infant had immediately after being born due to the cold and the lack of sanitary facilities, and her displaced mother’s health condition is also critical. According to the aid workers, the survival of many children in these mountains and deserts is in danger due to the cold and lack of water, food and shelter.

Many displaced families say that they have left a number of young children and other members behind when they fled or were separated from them on the way due to the difficulty of the routes and passage, said the aid workers. But now none of them know about the fate of the other.

Although, four days ago, a number of humanitarian relief organizations, including UNHCR, IOM, UNICEF, and so on arranged an emergency meeting in Bamiyan, announcing their readiness to provide assistance to the refugees of the Balkhab war, but till now, four days have passed since that meeting. Based on information, none of these organizations has taken practical actin to help the refugees so far. There are some speculations that the Taliban have prevented these organizations from providing aid to those displaced people.

Apart from these speculations, the refugees of Balkhab war need urgent humanitarian aid. Some citizens of the country say that aid organizations should not be affected by the vengeful approach of the Taliban against the refugees of the Balkhab war.

10 days ago, Taliban forces marched with light and heavy military equipment to Balkhab district of Sar-e-Pul province with the aim of suppressing Mawlawi Mehdi and his loyal fighters. Finally, this group started its attacks on Mawlawi Mehdi’s positions in Balkhab after Thursday. Mawlawi Mehdi and his people also defended their positions. This conflict lasted for four days and the Taliban have succeeded to capture the center of Balkhab district by breaking the defense lines of fighters loyal to Mawlawi Mehdi. Simultaneously, with the beginning of the Taliban aggression on Balkhab and the cutting of communication networks by this group in this district, thousands of families from dozens of villages from the center and surrounding areas of Balkhab have been displaced to the mountains and valleys due to fear of possible Taliban revenges and tortures. In addition, the Taliban have shot dozens of civilians in Balkhab and have beaten a number of them by launching a house-to-house search.

A source in the center of Balkhab, who did not want to be named, says that two days ago, the Taliban forces asked the residents of each village in Balkhab for 20 weapons to be submitted to Taliban in a meeting in the center of this district.