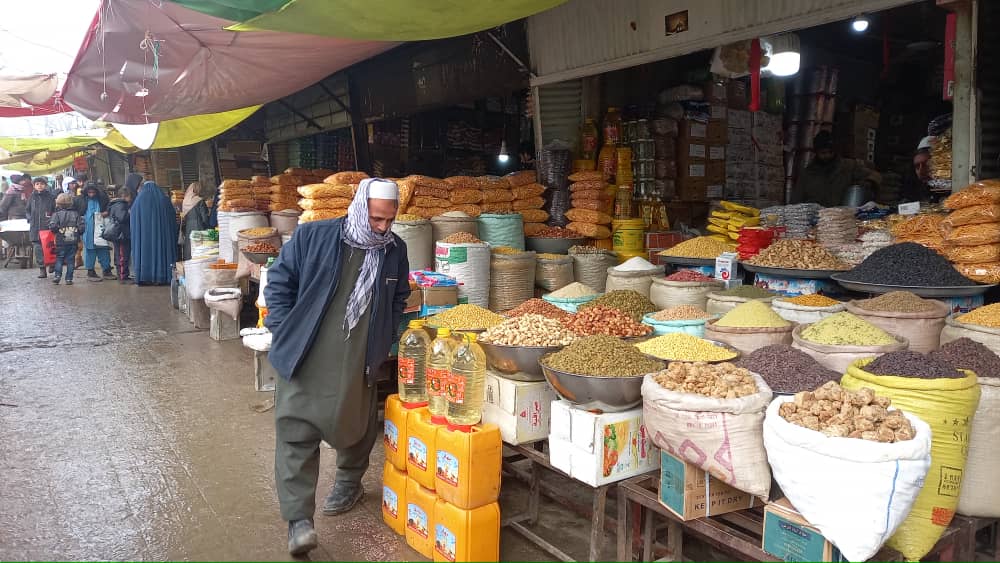 Mazar-e-Sharif residents say they are unable to meet their basic needs due to unemployment and high commodity prices.

After the Taliban takeover of Afghanistan, the challenges of ordinary people have multiplied. Citizens in the northern city of Mazar-e-Sharif are complaining about food insecurity, saying that unskilled workers are on the brink of starvation if the issue is not addressed.

Residents of Mazar-e-Sharif say they are unable to meet their primary survival needs due to unemployment and the high price of raw materials. They insist that the Taliban group no control over the market in Balkh and that some traders are also hoarding consumables.

Vendors are also talking about a recession in the market due to unemployment and poverty, stating that trade transactions and businesses have been reduced by 50%.

Mohammad Rustam, an old man looking for a source of income from dawn to dusk with a wheelbarrow in his hand. “I have a family of eight and I am the only breadwinner in my house,” he told Hasht-e Subh. “I get out to work in the early morning without having breakfast and until dinner. I usually return home in the evening with maximum of 100 – 150 AFN. The amount that I earn on daily basis is not even enough for me purchase flour, let alone the other requirements of the commodities.

Mehrullah is a 55-year-old man who sells dairy products in the market. Before commenting on food prices, he complained of harassment by Taliban forces in Mazar-e-Sharif, saying that he was being beaten daily. “I leave home in the morning to work, and sometimes I even offer prayers here in the street, and then I go home,” he says. “I work for 200 to 300 ANF a day, but I can not buy anything with this money. I feel ashamed of my grandchildren. When I go home, he tells me, Baba Jan, bring me an apple. I excused to him the apple is not ripe yet. Let the time come, I will bring it to you. The next day he had seen the apple in the neighbor’s house by accident, and when I went home at night, my grandchild told me the apple is ripe, why did I lie to me?”

However, Ezatullah, who want to buy food, also complains about the high price of food. But he blames the Taliban. “The problem is with the current government, not with the people or traders,” said Ezatullah. “The merchant is on his own. Whatever he does, there is no one to ask him. The [Taliban] government must put pressure on the businessmen, traders, and control the market,” he suggests.

On the other hand, vendors in the city of Mazar-e-Sharif say that their sales have decreased by half compared to the past. They attribute the rise in food prices to declining imports, high customs duties and rising prices in world markets.

Burhanuddin, a vendor in Mazar-e-Sharif, says that after the changes that have taken place in the country, more people have fallen into poverty and unemployment, and their economic competency has dropped dramatically. “Overall sales have decreased,” he said of his trade and the prices of some raw materials. “In the past we used to earn 50,000 AFN, now we earn 20,000 or 25,000 AFN. Prices have also risen. For example, a pack of flour used to be sold for 2,100 AFN, but now it is sold for 2,700 AFN. “A 24-kilogram rice pack, which used to cost 2,500 AFN, has now has reached 3,000 afghanis.”

Haji Nooreddin, another vendor in the central grocery market in Mazar-e-Sharif, says prices have risen due to high customs duties and rising prices in world markets. According to him, the war between Russia and Ukraine has also affected the flour price very significantly in the country. “People cannot afford to buy food,” he said. “How can a person who goes to work for 250 AFN and does not find a job buy oil for 1,750 AFN? How to buy a kilo of tea for 300 AFN?”

Mohammad Aref, who owns a grocery store in Mazar-e-Sharif, said of his daily views: “The economic situation of the people is so bad that they cannot buy a rice pack. Someone who used to buy a rice pack came today to buy only a kilo of rice.”

Mazar-e-Sharif residents have criticized local Taliban officials, saying they are harassing people instead of providing jobs and controlling the market. According to them, although the group’s forces collect money from businessmen and do not allow the businesses to operate normally and without fear.

Since the Taliban group has taken over the control of the country, the group has been very busy with marginal issues such as imposing restrictions on public, fighting against women, human rights, and education. They have very badly failed to cooperate with the people in order to get the country out of the crises that they themselves have created with the so baseless fights and arguments against the overtaken Kabul administration.

Taliban’s ideology does not have the capacity to think beyond the box. They have limited security into physical assurance that when you are not killed, it means you are secure which is nothing more than a false propaganda. No one in fact feels secure. Fighting and clashes are going on in different parts of the country and the people due to security concerns that have been created as result of the financial crises are not safe in the center of the cities.

The purchase power of the people has dramatically dropped down. Crimes such stealing, kidnaping, and killing for the sack of money have created a major issue for the people in the center of the cities. Taliban has failed even to ensure the security of a single city, let alone the whole country.