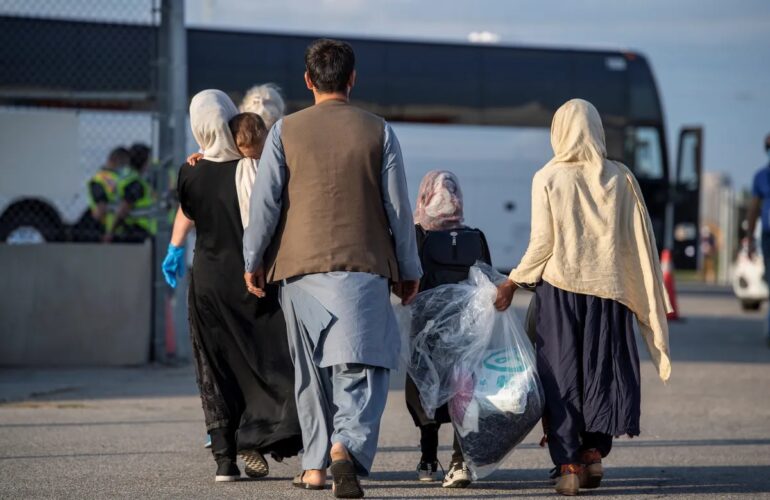 Refugees’ Misery: Afghans Without Residence Permits Must Leave Pakistan Within Next 16 Days

The deadline set by the government of Pakistan for foreigners whose stay visas have expired will expire in the next 16 days. Pakistan’s Interior Ministry issued an official statement earlier, warning that foreign nationals must leave this country by the end of this year, otherwise, they will be fined or imprisoned. Afghan immigrants in Pakistan have recently received a warning through contact numbers that if they stay longer than the specified period, they will be imprisoned and their names will be blacklisted for entry into this country. This warning from Pakistan’s Interior Ministry has now put the Afghan refugees in this country in a pathetic and indecisive situation.

Pakistan’s Interior Ministry has issued a statement for the second time, according to which foreign citizens living in this country are required to extend their visas or obtain permission to leave this country. In the seven-items statement of the ministry, it is said that after the expiration of the validity of the stay visa in Pakistan, foreigners will have to pay a fine to get permission to leave the country.

Afghan refugees living in Pakistan reported receiving alarming text messages from Pakistan’s Interior Ministry in speaking to Hasht-e Subh. By sharing the text messages received through Pakistani SIM cards, they said that they have been asked to renew their stay visas before the end of this year. Otherwise, they will face three years of imprisonment and their names will be included in the black list, based on which they will not be able to enter this country in the future.

“The last deadline to obtain an exit permit for foreign nationals who have overstayed under amnesty is December 31, 2022,” the text message sent to the mobile phones of Afghan immigrants in Pakistan reads. “Apply for Pakistan’s Visa through online system to avoid a three-year jail sentence and being blacklisted for future entry into Pakistan.”

Simultaneously, some Afghan citizens living in Pakistan say that they have applied for visa extension for more than a year, but they have not been able to have their visa extended. They complain about corruption in the process of obtaining stay visa extension, saying that they cannot afford to pay commissions for visa extension and adding that their residence permits will not be extended through legal channels without paying commissions. Samira (pseudonym) is an Afghan citizen residing in Pakistan who applied for the extension of her stay visa in this country about 12 months ago. “After a year, I am still waiting for a visa extension, but since it is not possible without paying bribes and commissions, they do not grant us stay visas and we are not able to pay the commission,” she said. According to her, it is difficult for large families to pay for visa extension. Shukria Siddiqi, another Afghan citizen living in Pakistan, says: “I have been in Pakistan for 15 months. Extending a six-month visa is more than 20,000 Pakistani rupees, which is not affordable for a refugee inside Pakistan. We have a short stay in Pakistan. When our case is processed, we will leave this country.”

Miss. Sediqi wants the European and Western countries to speed up the process of immigration cases of Afghan immigrants. She explains that there is no information about the progress of the US’s Priority 1 (P1) and P2 cases and the interviewing process of these cases has yet started. This Afghan immigrant in Pakistan wants the United Nations High Commissioner for Refugees (UNHCR) in Pakistan to give immigration cards to the refugees or solve the issue of their stay in Pakistan with the government officials of this country. According to her, refugees inside Pakistan cannot raise their voices because of fear of the police. She asks the UNHCR in Pakistan to act as soon as possible to solve their problems.

Wahid Ahmad is another refugee from Afghanistan who lives in Rawalpindi. “I live in Awan Market, Rawalpindi. Immigrants whose visas have expired, before the deadline, the police came and took money from their families,” in an interview with Hasht-e Subh, he expressed. “We are harassed in police stations. I was going to Barako five days ago, they stopped me, making an excuse that they would take us to the police station. We had the United Nations registration letter, but they did not accept it. We paid them, they let us go and said to be aware of it in the future. We are facing harassment. We have applied for a stay visa, but they do not give us visas, and we cannot go there [Afghanistan], nor are we in comfort here [in Pakistan].”

Meanwhile, some refugees who receive a new stay visa are required to have the entry and exit stamps of both Pakistan and Afghanistan in their passports in order to have a validated visa. Two days ago, one of the migrants who went to the Torkham border for exit and entry stamps was temporarily detained by Taliban forces, then being released after several hours of interrogation.

“We were going to G11 [a neighborhood in Islamabad, Pakistan], two policemen stopped our car on the street. After searching us, they asked for documents,” said Azim, an Afghan refugee who was forced to pay the Pakistani police. “Since I didn’t have the visa, I showed on my phone that I have these documents. They said that since you don’t have hard copies, you should go to the police station. I was in a hurry, they took half an hour. A policeman pulled me aside and said that you understand the conversation. I will take you to the court, you will be there for three or four hours, agree to pay twenty thousand rupees instead, then we will let you go. After bargaining, a mediator appeared on the scene. “Finally and fortunately we gave them 200 Pakistani rupees – because our documents were correct, we only didn’t have hard copies.”

“We sought refuge here out of misery, but it turns out that a homeless person cannot be sheltered anywhere,” Omid Shaigan (pseudonym), another Afghan refugee in Pakistan, said. He, who has been in Pakistan for months, expressed: “I am disappointed with everyone. Organizations that feed on the name of human rights are at the service of the powers and have no regard for the existence of refugees and refugee rights, and the more helpless the refugees are, the richer they get. Now that Pakistan’s government has set a deadline, it wants to put more pressure on human rights organizations to get more money.”

Meanwhile, Pakistan’s police have arrested more than a thousand Afghan citizens in the city of Karachi. Last week, the Taliban embassy in Islamabad announced that as a result of the efforts made by their consulate, more than 300 migrants have been released from Pakistan’s prisons. However, the helpless and homeless immigrants are looking for the support of Pakistan’s government and the UN delegations to take action for their misfortune. They emphasize that they have no way to walk and no place to stay. And this is the hardest pain of homeless refugees.

It is estimated that more than four million Afghan citizens live in Pakistan. These people have left the country for different purposes. These include medical treatment, business, processing cases at embassies and escaping the Taliban. Although the government of Pakistan has repeatedly announced that it hosts Afghan immigrants in this country properly and will provide them with residence permits and visa extension, the bureaucracy causes every Afghan citizen to wait for months for their visa to be extended.