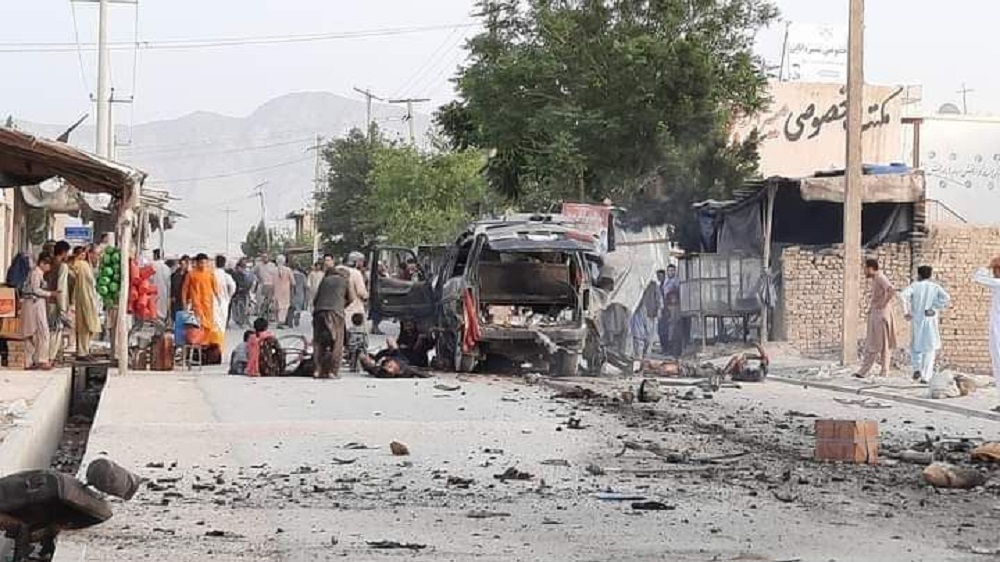 “Thief Partner or Comrade-in-Arms”: Are the Taliban Incapable of Providing Security?

Is the Taliban incapable of providing security or the group is intentionally making the people vulnerable to attacks.

Contrary to the Taliban’s widespread propaganda of “establishing security”, Kabul and the city of Mazar-e-Sharif witnessed bloody explosions on Wednesday. Such attacks have occurred before. The bombings have been costly, and critics and opponents of the Taliban have speculated that the group has failed to provide security, acting as a “thief partner” and a “comrade-in-arms” simultaneously. There has long been talks of the Taliban’s internal strife, and the allegation that bloody attacks are being carried out by the group’s affiliates has been raised by the National Resistance Front. The National Resistance Front has said that Taliban control over its affiliated suicide squads has slipped out of their control, blaming the Taliban for the bloody attacks.

The blasts in Mazar-e-Sharif targeted passenger vehicles and took place in areas where the majority of the population is Hazaras and Shiites. Similar attacks have occurred in the past in these areas, which have left hundreds of casualties. Taliban officials in Balkh have announced that 9 people were killed and 15 wounded in a series of explosions in the city of Mazar-e-Sharif on Wednesday evening. But local sources report the actual causalities’ figures are higher than what the Taliban usually reports. The first blast targeted a minivan in the fifth district of Mazar-e-Sharif, killing most of its occupants. Two other explosions occurred in two other minivans in the Karta-e-Ariana area of ​​the 10th district of Mazar-e-Sharif.

In Kabul, the Zakaria Mosque in the fourth district of Kabul was the target of an explosive attack. Khalid Zadran, spokesman for the Taliban’s police command in Kabul, said the blast occurred at the traffic intersection, in the fourth district, inside the Hazrat Zakaria Mosque. Embedded explosives caused this event. He has reported six causalities. In Contrast, Kabul Emergency Hospital, which the Taliban has recently ordered not to reveal the exact number of security related casualties has reported 22 wounded, five of whom were already dead when shifted to the respective hospital. In addition, a number of the wounded and dead bodies were taken to Hayat Hospital, a private hospital.

Lawyer Wahid Farzahi, who was inside the Zakaria Mosque at the time of the blast, told Hasht-e Subh that the blast occurred after a prayer and that the sound of the blast was terrible. Farzahi has further added that due to the intensity of the explosion, his ears were damaged and he thought that the explosion was not dangerous, but he saw several bodies that were taken to Al-Hayat Hospital. He estimates that more than 10 people are killed in the blast.

Bloody and deadly explosions have continued targeting innocent civilians since the Taliban has taken over the control of the country. Contrary to Taliban’s propaganda. Even the Taliban leaders in Kabul have not been safe from the attacks. Last week, when Taliban leaders gathered at the Esteghlal Hotel in Kabul, an explosion took place, which was claimed by both the Azadegan Front (Liberation Front) and the ISKP simultaneously. The Liberation Front in a statement labeled the Taliban and ISKP are two sides of the same coin and further declared that ISLP’s claim of targeting Taliban is not true and they are the same as Taliban. Earlier, a Taliban rally in Kabul was attacked. This type of attack, however, are very rare compared to attacks targeting civilians, ethnic groups, and civilians.

After the Taliban took control, Kabul, Herat, Kunduz, Kandahar and Balkh have witnessed deadly attacks on mosques, schools, passenger vehicles, sports fields and monasteries. The ISKP has claimed responsibility for some of the attacks. However, the Taliban continues to speak of national security, despite attacks that have left dozens dead and wounded.

Attacks in Mazar-e-Sharif and Kabul have also provoked reactions at national and international spheres. In a message, former President Hamid Karzai called the attacks a “crime against humanity” and contrary to all human principles and values. He suggested that in order to prevent “foreign conspiracies” and to ensure lasting peace and stability in the country, unity and strengthening of national dialogue should begin. He considers this to be the only way to save the country. Abdullah Abdullah, the former Head of the Supreme National Reconciliation Council, has, like Karzai, described targeting mosques and attacking innocent citizens as violating Islamic norms and human values, and thus committing crimes against humanity. However, he has not proposed any solution to the issues.

Mohammad Mohaqeq, leader of the Islamic Unity Party of Afghanistan and a member of the Supreme Council of National Resistance for the Salvation of Afghanistan has said in response to the incident that tens of “defenseless Hazaras” have been killed in three attacks in Karta-e-Sultan Baba Alishir, Ali Chupan area and Kart-e-Ariana in Mazar-e-Sharif. According to him, an explosion at the Hazrat Zakaria Mosque at the traffic intersection in Kabul also targeted Sunni Afghan citizens. According to him, the sum of these incidents shows that the Taliban does not have the “ability to provide security” to the people or that they themselves are “partners of the thief and comrade of the convoy.” The Taliban have not yet commented on their opponents’ remarks.

To look back, a month ago, Kabul and Mazar-e-Sharif were under brutal terrorist attacks that particularly targeted Hazara community. The incidents sparked reactions at national and international spheres, calling the attacks as clear motives of ethnic cleansing.

The same series of ethnic cleansing attacks have targeted Hazara community in Mazar-e-Sharif on Wednesday (May 25, 2022) and in Kabul two days ago, which was not covered by the media and the Taliban closed the chapter as declaring it gas balloon explosion at Star Educational Society located at the center of Hazara dominated area in Dasht-e-Barchi, western Kabul.

The Taliban are using the ISIS label to launch attacks on Hazara community in Kabul, on highways between the provinces and center of the cities across the country. The many ethnic cleansing attacks that the Taliban used to claim responsibility for include suicide-bombing attacks on Mawood Educational Institute in August 2018, car loaded suicide attack on Sayed-al Shuhada Girls School in May 2021, and an attack on a maternity hospital in Dasht-e-Barchi are three out of many attacks on Hazara community on May 12, 2020.