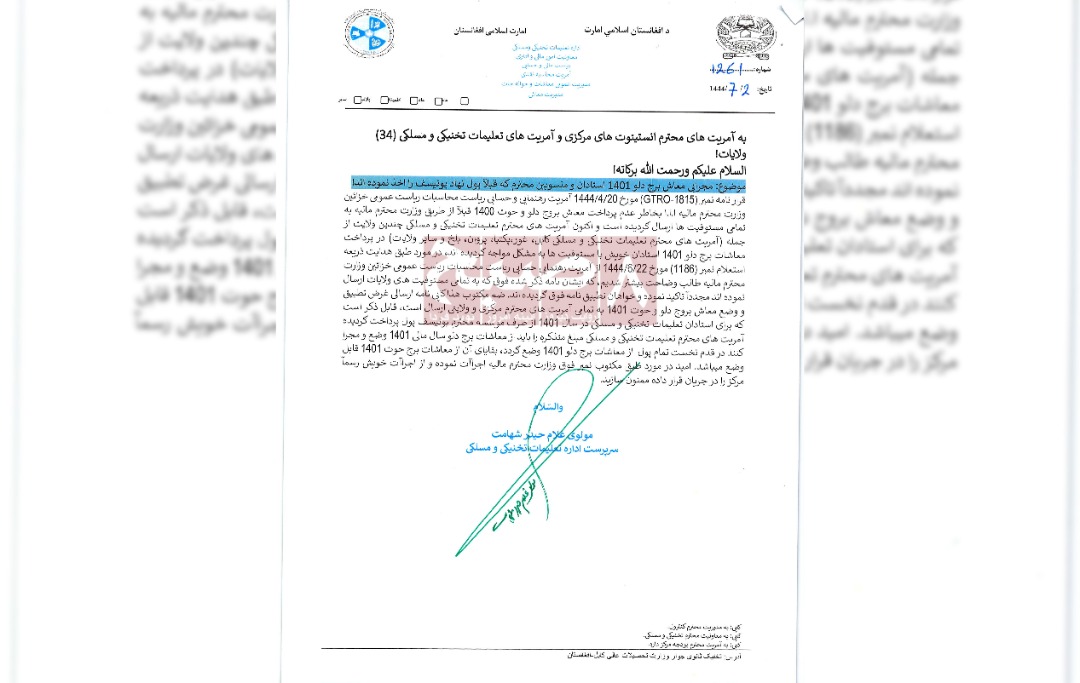 Taliban to Deduct Teachers’ Salaries, Justifying That They Received UNICEF Aid 2 Months Ago

The Taliban will return the salaries of the school teachers for the next two months to the treasury of its finance department, justifying that the money distributed by the United Nations International Children’s Emergency Fund (UNICEF) or the UN Children’s Fund to the teachers as humanitarian aid should be calculated in return for their salaries.

According to letters obtained by Hasht-e Subh on Wednesday, UNICEF provided 18,000 AFG in the form of humanitarian aid, in addition to their monthly salary, to each teacher last November.

Now, the Taliban have ordered the treasury department of its Finance Ministry, technical and vocational education departments and their governors to deduct two months’ salaries of the employees and teachers in Education Ministry, as they have received humanitarian aid from UNICEF.

A teacher, who refused to reveal his identity due security concerns, criticized this Taliban decision, considering it cruel and inappropriate.

“The Taliban have issued a new order, according to which, the teachers’ two-month salaries will be returned to the [Taliban] government treasury because of UNICEF’s humanitarian aid,” said the teacher. “In this extreme cold, teachers, who desparately need help, are wandering with the question of what to eat and how to pay bills. Is humanitarian aid provided to be taken back from them?” the teacher asked.

Teachers explained that the mentioned amount was provided to them by UNICEF to cover the winter season expenses, adding that the deduction of their monthly salaries is illegal.

The Taliban have not commented on this matter as of yet.

UNICEF announced in early 2022 that it will pay the monthly salary of teachers in Afghanistan.

Recently, an international media outlet reported that the Taliban, since taking over Afghanistan, illegally looted and stored $1 billion of humanitarian aid provided to this country.